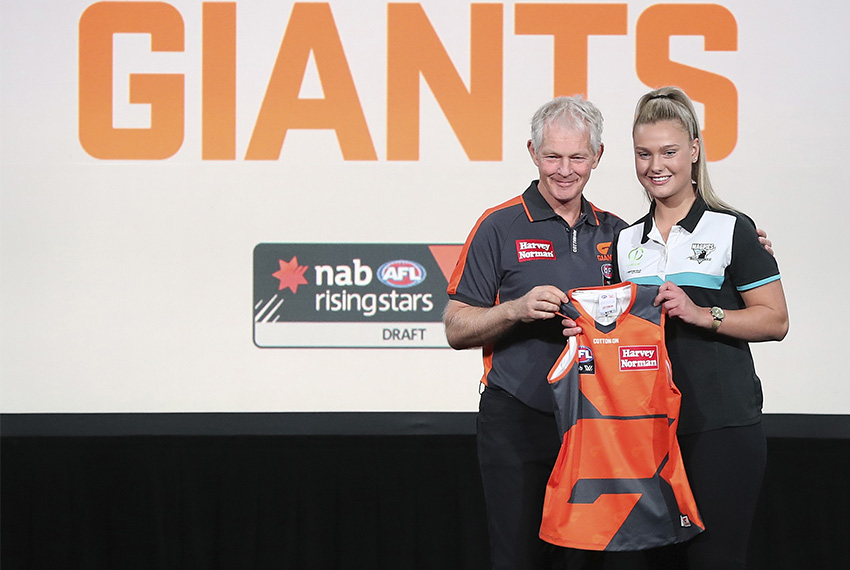 A plethora of AFL NSW/ACT’s most promising footballers have made their way onto AFLW lists with eighteen players associated with our programs selected in the 2019 NAB AFL Women’s Draft.

Headlining the NSW/ACT draftees is Maggie Gorham, who made her way to the GWS GIANTS with the fourth overall pick.

Gorham nominated the NSW draft zone after dominating the AFL Canberra competition this year, culminating in her winning the Bainrot Medal, the league’s Best and Fairest award.

The 18-year-old becomes the second Belconnen Magpies player to be selected with the GIANTS’ first pick of the AFL Women’s Draft, following in the footsteps of Jodie Hicks in 2017.

Canberra-based footballer Hannah Dunn was the next NSW/ACT product to be drafted, with the Gold Coast SUNS using their second selection (pick 22) to draft the 28-year-old.

Dunn has been a mainstay in the Queanbeyan Tigers’ midfield for the last 10 years, competing in the Canberra Women’s Competition.

Along with playing in the AFL Canberra competition, Dunn signed for Norwood in the 2019 SANFL Women’s competition, finishing third in the league Best & Fairest.

Originally from Nelson Bay, Steane moved to Sydney two years ago to pursue her AFLW dream and was part of the GIANTS’ VFLW program this year.

Recruited from Eastlake in the AFL Canberra Women’s competition, Allen was prolific in 2019, averaging 25.4 disposals, five marks and three clearances.

The 25-year-old also impacted the scoreboard, finishing with seven goals for the year.

The 19-year-old forward hails from Canberra and plays for the same local club as fellow SUNS draftee Hannah Dunn, the Queanbeyan Tigers.

Hamilton represented NSW/ACT in the 2018 NAB AFLW National Championships where she won All Australian honours.

With their first pick in the NAB AFLW Draft the Melbourne Demons selected another Queanbeyan Tigers product, forward Jacqueline Parry.

Part of the GIANTS’ VFLW program, Halvorsen is capable of playing both back and forward.

Defender Brenna Tarrant was selected by the Melbourne Demons with pick 72, their second overall selection.

Tarrant, a versatile player from Western Sydney was named in the back pocket of the NAB AFL Women’s Under-18 All Australian team after a consistent year for the East Coast Eagles, but also kicked a bag of four goals earlier in the season.

With pick 76 the GIANTS selected Emily Goodsir, also from the East Coast Eagles.

A hard-bodied midfielder, Goodsir is an elite runner who also loves getting the inside ball, she was also a part of the GIANTS’ VFLW program in 2019.

After moving back to Adelaide with her young family in 2019, former AFL Sydney Mostyn Medallist Courtney Gum decided to come out of retirement and the Adelaide Crows swooped, selecting the decorated midfielder with pick 83.

Gum was named an All Australian in her debut AFL Women’s season with the GWS Giants in 2018, also winning the AFL Players Association’s MVP award.

The East Coast Eagles utility played at the last three NAB AFLW Under-18 Championships for NSW/ACT and was named in the 2019 AFLW Academy Squad.

Garnett recently took part in the 2019 NAB AFLW Draft combine, recording impressive results in the YoYo test (Second with 16.8) and in the 20 metre sprint (3.461 seconds).

Breward has been in the SUNS Academy since the age of 16 and is based in the Northern Rivers, playing club football for Coolangatta.

Playing for NSW/ACT in the 2017 National Championships, Breward impressed in the midfield, culminating in her selection in the All Australian squad.

Hailing from the Belconnen Magpies, the defender spent 2019 at Hawthorn in the VFLW, but heads West as the Eagles build a ready-made team for their inaugural season.

Subiaco’s Tarnee Tester will provide West Coast with some firepower up forward, selected with pick 56.

The 26-year-old from North Broken Hill booted a season-high 27 goals in 2019, and was part of the WAFC Development Squad.

UNSW-ES Bulldogs trio Tait Mackrill, Rebecca Privitelli and Lisa Whiteley were also re-drafted by the GIANTS after previously spending time on their list.

Wagga Wagga product Gabrielle Colvin will join Tarrant and Parry at Melbourne in 2020, after she was selected by the Demons with pick 77.

l2019 AFLW Draft Preview - Who are NSW/ACT’s Top Prospects?
The text that changed everything for Cripps-like prospectr 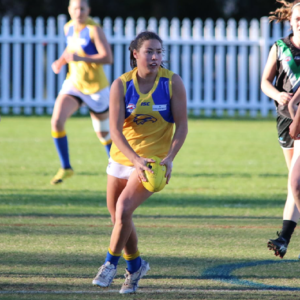