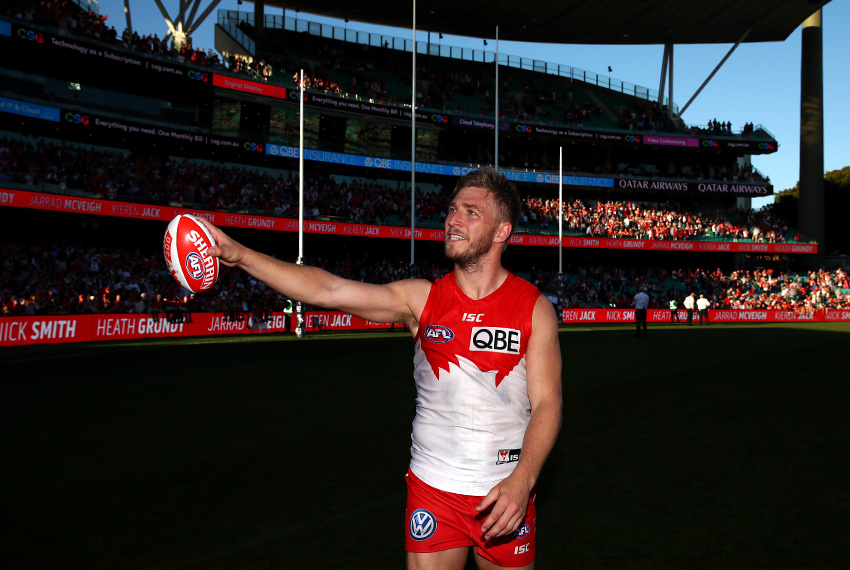 While a lot is made of the importance of early picks, clubs can score massive wins by finding gems late in the draft, and indeed the pre-season and rookie drafts. We take a look look at AFL NSW/ACT’s Top 10 best players drafted at pick 40 or later since 2000.

A former NSW/ACT Ram, Nelson Bay’s Craig Bird was drafted with pick 59 in the 2007 national draft by the Sydney Swans. He made his AFL debut in 2008, finishing the season as the Swans’ Rising Star winner alongside Kieran Jack. In 2012 Bird played an instrumental role in Sydney’s Grand Final win over Hawthorn. After 137 games for the Swans he was traded to Essendon in 2015, playing a further 20 games for the Bombers before being delisted in 2017.

Another former NSW/ACT Ram, Sydney’s Jarrod Witts was drafted by Collingwood with pick 67 in the 2011 national draft. He made his AFL debut against St Kilda in Round 5 of the 2013 season and was named in the AFL’s 22 Under 22 Team the following season. At the end of 2016 he was traded to the Gold Coast, named the SUNS’ captain alongside David Swallow in 2019. Following a breakout 2019 season, Witts claimed his first ever Best & Fairest award, the club’s highest individual honour.

Zac Williams played his junior football for the Narrandera Eagles, joining the GWS GIANTS Academy at the age of 15. He was selected with pick 54 in the 2013 rookie draft, becoming the first GIANTS Academy graduate to play senior AFL when he made his debut in round 5, 2013. The 25-year-old has played 102 games for GWS, firmly establishing himself as a key member of the GIANTS’ backline with his trademark run and carry.

A product of Wagga Wagga in country NSW, Suckling was drafted by Hawthorn with pick 22 in the 2007 rookie draft. After he was struck down by osteitis pubis in 2007, he was retained on the rookie list for 2008.

Suckling was redrafted to Hawthorn’s rookie list with pick 81 in the 2009 rookie draft before being elevated to the Hawks senior list with pick 70 in the 2009 AFL draft. Making his debut for Hawthorn in the opening round of the 2009 AFL season against Geelong, Suckling unfortunately missed Hawthorn’s 2013 premiership campaign after tearing his ACL. The defender then won back-to-back premierships with the Hawks in 2014 and 2015 before exercising his right as a free agent to join the Western Bulldogs in 2016.

Another product of Wagga Wagga, Adam Schneider was drafted by the Sydney Swans with pick 60 in the 2001 national draft. He made his AFL debut in Round 1 of the 2003 season against Carlton, going on to play 98 games for the club, including their drought breaking 2005 Grand Final triumph against West Coast. In 2007 Schneider was traded to St Kilda in exchange for Pick 26. He played 130 games for St Kilda, before retiring in 2015 after 228 games in the AFL.

Joining Adelaide via the NSW Scholarship Program at the age of 16, Taylor Walker was drafted with pick 75 in the 2007 national draft. Born and raised in Broken Hill, Walker made his AFL debut in Round 1 of the 2009 season against Collingwood. In 2015 he was appointed Adelaide’s captain, named the AFLPA’s Best captain twice, before relinquishing the captaincy at the end of 2019. Adelaide’s leading goal kicker in 2011, 2012 and 2019, Walker is considered one of the greatest modern day forwards in the AFL.

After spending three years in the VFL with Williamstown, Dane Rampe relocated back to his native Sydney, joining the UNSW-Eastern Suburbs in the AFL Sydney competition. At the age of 23, Rampe was drafted by the Sydney Swans with pick 37 in the 2013 rookie draft having caught the eye of the Swans’ recruitment team when he was crowned the Phelan medallist as AFL Sydney’s best and fairest player. Since then, Rampe has played 159 games, named Sydney’s co-captain in 2019 alongside Josh Kennedy and Luke Parker. He capped off his stellar 2019 season with his first ever All-Australian selection and the Bob Skilton medal, Sydney’s highest individual honour.

Drafted out of Finley, NSW, Tom Hawkins was recruited with pick 41 in the 2006 national draft under the father/son rule, with his father Jack playing 182 games for Geelong between 1973 and 1981. He made his AFL debut in Round 2 of the 2007 season against Carlton. Since then the 31-year-old has played 256 games, kicking 554 goals, finishing as Geelong’s leading goal kicker every year since 2012. Hawkins played a crucial role in the Cats’ 2009 and 2011 Premiership triumphs, and was named an All-Australian in 2012 and 2019.

Rounding off our list is Sydney Swans legend Kieran Jack.

A Rugby League junior from Sydney, Jack was drafted with pick 58, in the 2006 rookie draft. Making his AFL debut in 2007, Jack captained the Swans between 2013 and 2016, won the Bob Skilton medal in 2010, received All-Australian honours in 2013 and was part of the clubs 2012 premiership triumph over Hawthorn. After 256 games for Sydney, Jack announced his retirement in 2019, ending his career as arguably AFL NSW/ACT’s greatest draft gem.