NAB AFL U18 Academy Series: Round 5 Round Up 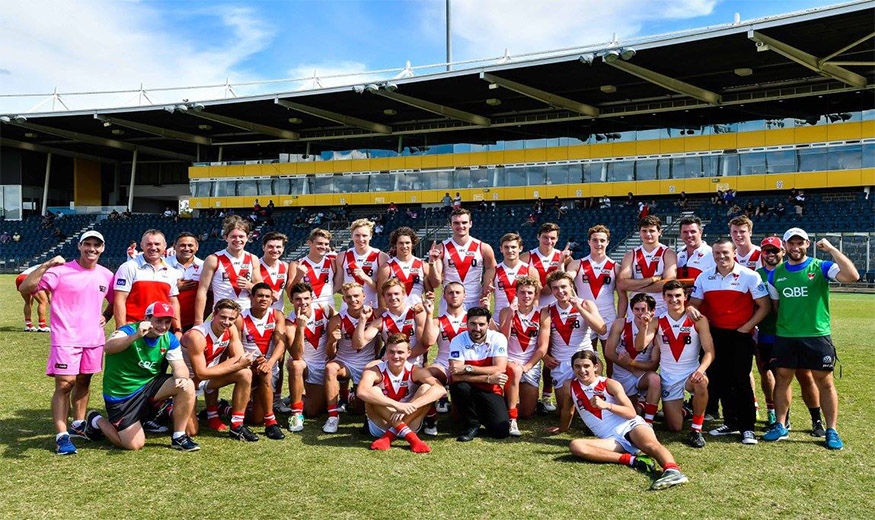 The Sydney Swans Academy have taken out the inaugural NAB AFL U18 Academy Series, finishing with an impressive five-nil win-loss record.

Playing Tasmania in Launceston for Round 5 of the series, the undefeated Swans confirmed their title with a 2-point win in chilly conditions.

Though they carried the ‘favourites’ tag leading into the match, the Swans were still challenged by the home side.

Down by nine points at half-time, the red and white were forced to play catch up football throughout the third term, clawing their way back to remain in touch at the final break.

“Tasmania jumped us from the first bounce and were playing great team football with high effort and purpose,” said Smith.

“The third term was our best football.”

Despite a wholehearted effort from the Tasmanian defence, the Swans edged ahead when it counted. After a see-sawing final term, the Swans were able to hold on and take the title of inaugural NAB AFL U18 Academy Series victors.

Jack Hardman proved the difference for the Swans, slotting a team high four goals from the forward line.

“There were some gutsy efforts in our midfield, and Jack Hardman was great up forward – this allowed us to escape with a two-point victory and the series clean sweep.

“It’s of great credit to Jared Crouch, our coaching staff and players, as well as our Operations Manager, Maddie Head who puts in a lot of work putting the logistical planning together.”

The GWS GIANTS Academy finished their NAB AFL U18 Academy Series on a high-note, holding out the Brisbane Lions Academy by four points on the Gold Coast.

Making for a challenging game, both teams suffered a plethora of injuries throughout, with the GIANTS having just one fit player on their bench by game’s end.

Despite leading at half-time by 13 points, the Lions pestered the GIANTS until the final siren.

Inaccuracy cost the Lions in the end, kicking two goals and five behinds in the final quarter to the GIANTS lone goal and two behinds.

GIANTS Academy Coach, Jason Saddington was pleased with his side’s ability to last out the tough match.

“It was a super effort to fight out the game and hold on for the win,” said Saddington.

“We lost two players early with injuries and had a number of others receive heavy knocks in the first half.

“With only one player on the bench through the last quarter we were out on our feet.  It showed great character from all players to persist and keep on finding a way to get to contests.”

Brendan Myers was a standout for the GIANTS in the midfield, while Rhys Pollock added four goals to the scoreboard.

“Brendan Myers produced his best game for the series in the midfield, and was consistently good around the contest, and with ball in hand.

“Nathan Richards worked physically hard in the ruck whilst Rhys Pollock continually gave us an edge as a small forward with his high work ethic.

“As a 17-year-old, Shaun Driscoll was impressive off half-back with his run and carry and overhead skills.

The GWS GIANTS Academy finished third for the series with three wins from five starts.