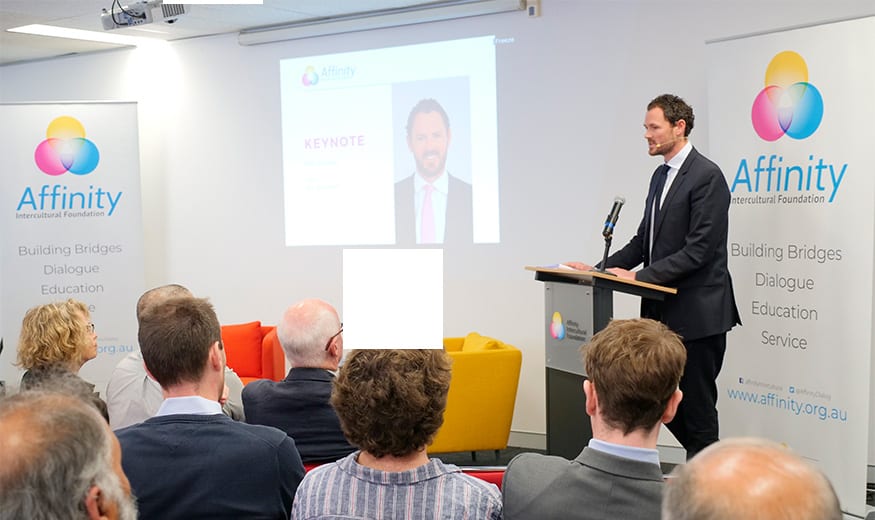 Affinity’s mission is to create and sustain enduring relationships with people through intercultural and interfaith dialogue.

Graham focused on three key values of connection, belonging and community amongst other things, highlighting the outstanding examples of young player Dema Jarrar locally at the Bankstown Bullsharks, Aliir Aliir’s impact from the Sydney Swans and the continued exceptional work of the GWS GIANTS in the multicultural space. He also focused on the contribution from Aboriginal and Torres Strait Islander peoples in making AFL what it is.

Graham acknowledged that “our game acted too slowly in standing up to support Sydney Swans legend Adam Goodes, who was subject to racial abuse, taunts and boos through the 2015 AFL Season.”

In closing, Graham’s words highlighted the power of sport and specifically AFL in positively shaping communities across Australia.

“AFL means much more than spectacular goals and winning Premierships, success for us isn’t simply measured by the scoreboard at the final siren,” said Graham.

“Australian football has the capacity to act as a glue that binds diverse communities in the goal of creating welcoming and inclusive environments that consistently create positive change.

“It is a game that has produced outstanding athletes such as Aliir Aliir, Adam Goodes, Stephen Coniglio and future stars like Dema Jarrar who do not simply define their impact by what they do on the field, but also in their capacity for leadership and inspiration off it.

“At its best, our iconic Australian game has the power to change lives both on and off the field, crucially promoting connection, belonging and community.”