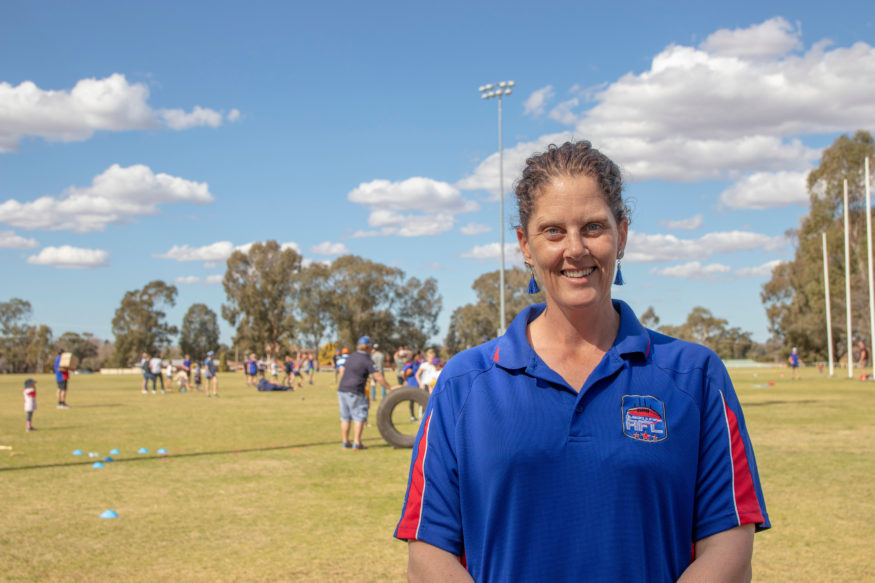 AFL NSW/ACT is delighted to announce the recipient of the 2019 Volunteer of the Year, Merinda Roll from the Dubbo Juniors Football Club in the AFL Central West region.

Roll, the first female President at her club, has been awarded the coveted prize following a nomination from the Dubbo Juniors Football Club.

“[Merinda] has lead her club back into the AFL Central West Juniors  and has gone above and beyond to make sure that the transition was as seamless as possible,” said the nomination.

“Merinda organised pre-season events to grow interest and communicated with all 2019 participants to ensure teams would get on the park. Throughout the season, she has maintained regular communication with the parents, players, and committee members and has developed a positive relationship with the AFL Central West competition admin committee.

“Merinda has taken on more than just the Presidency. She coordinated Auskick and attended all meetings until a permanent coordinator was appointed, whilst also acting as the game day registrar for both junior teams and the welcoming face that greets every player and parent at the ground each week for training and games.”

Aside from the major prize of the 2019 Volunteer of the Year, many volunteers from across the region have also been recognised for their contribution to the game.

All category winners including our Volunteer of the Year, will receive an invitation to the Toyota Good for Footy AFL National Volunteer Awards held in Melbourne during May 2020, return flights, and two nights accommodation in Melbourne.

AFL NSW/ACT also have two Merit Award recipients for their ten or more years of outstanding service to community football – Rodney Sheedy from AFL Riverina and Michael Sloan from the AFL Central West.

AFL NSW/ACT Community Football Support Manager, Jacinta Houston says that volunteers such as our award winners, are a credit to the Australian Football community.

“Volunteers are the backbone of any AFL club in the country – without them, we haven’t got a game,” said Houston.

“We know how busy volunteers are so with awards such as these, we want to say a huge thank you. We truly do appreciate all the time, effort and energy you put into AFL each season.

“We are lucky enough to have some of the best volunteers here in New South Wales and the ACT, which was evident in the quality of nominations we received. Congratulations to all the category winners – you are all very deserving recipients.”

AFL NSW/ACT congratulates all award winners and nominees, and thanks each and every volunteer for their dedication to the game in the great state and territory of New South Wales and the ACT.