The AFL have today released the final Round 23 fixture, for would could end up being a vital set of matches for both the Sydney Swans and GWS GIANTS.

AFL General Manager Clubs, Travis Auld said the AFL had sought to fixture the final round so that matches that could potentially affect the make-up of the top eight were spread across all three days of games to be played.

As Round 23 will be followed by a bye week for all clubs that are contesting the finals, he said the AFL had sought equally to maximise the potential attendance at each game, to provide the best possible schedule for the AFL’s broadcast partners – the Seven Network, Foxtel/Fox Sports and Telstra – and to hopefully cap an outstanding premiership season with a dramatic conclusion to the home and away matches.

“In 2017, the finishing position for the last spot in the final eight was determined in the closing minutes of the final match of Round 23 between West Coast and the Adelaide Crows at Subiaco, before we went into a memorable finals series,” Mr Auld said.

“The likely key matches that will settle the top eight this year have been spread across Friday, Saturday and Sunday and will hopefully make for a wonderful last weekend of football, before our showcase finals matches.”

Sydney will play Hawthorn in Round 23 on a Saturday evening on August 25 at the SCG from 7.25pm. Mr Auld said the Sydney Swans verse Hawthorn match was the other consideration to be played on Friday night, but was scheduled for Saturday night. This showpiece match could have strong implications for the make-up of the final eight.

The GIANTS will also have a blockbuster game on their hands during Round 23, taking on Melbourne. The match has been announced in the 3.20pm timeslot on Sunday, August 26 at the MCG. With the GIANTS and Demons currently sitting only a half-game of points apart, much like the Swans, the GIANTS’ final round of football could be extremely interesting.

Mr Auld said the AFL was hopeful – with four rounds remaining in the season – that they could yet eclipse the 2017 Toyota AFL Premiership Season all-time record of 6,732,601 fans. AFL Attendances currently stand at 5,597,031.

Round 23 is the AFL’s final Super Round for the season, where it’s all about the fans. No matter where a fan’s team has finished on the ladder, the Round 23 matches will be a celebration of footy and a fun day out for all ages, where kids go free at all venues*. Every match will see entertainment, special appearances by Marvel superheroes, food and beverage offers plus much more.

Super Round is an extension of the Sunday Funday initiative, in its fourth season, with the AFL ensuring matches continue to be accessible and affordable.

*More information and tickets on AFL.com.au 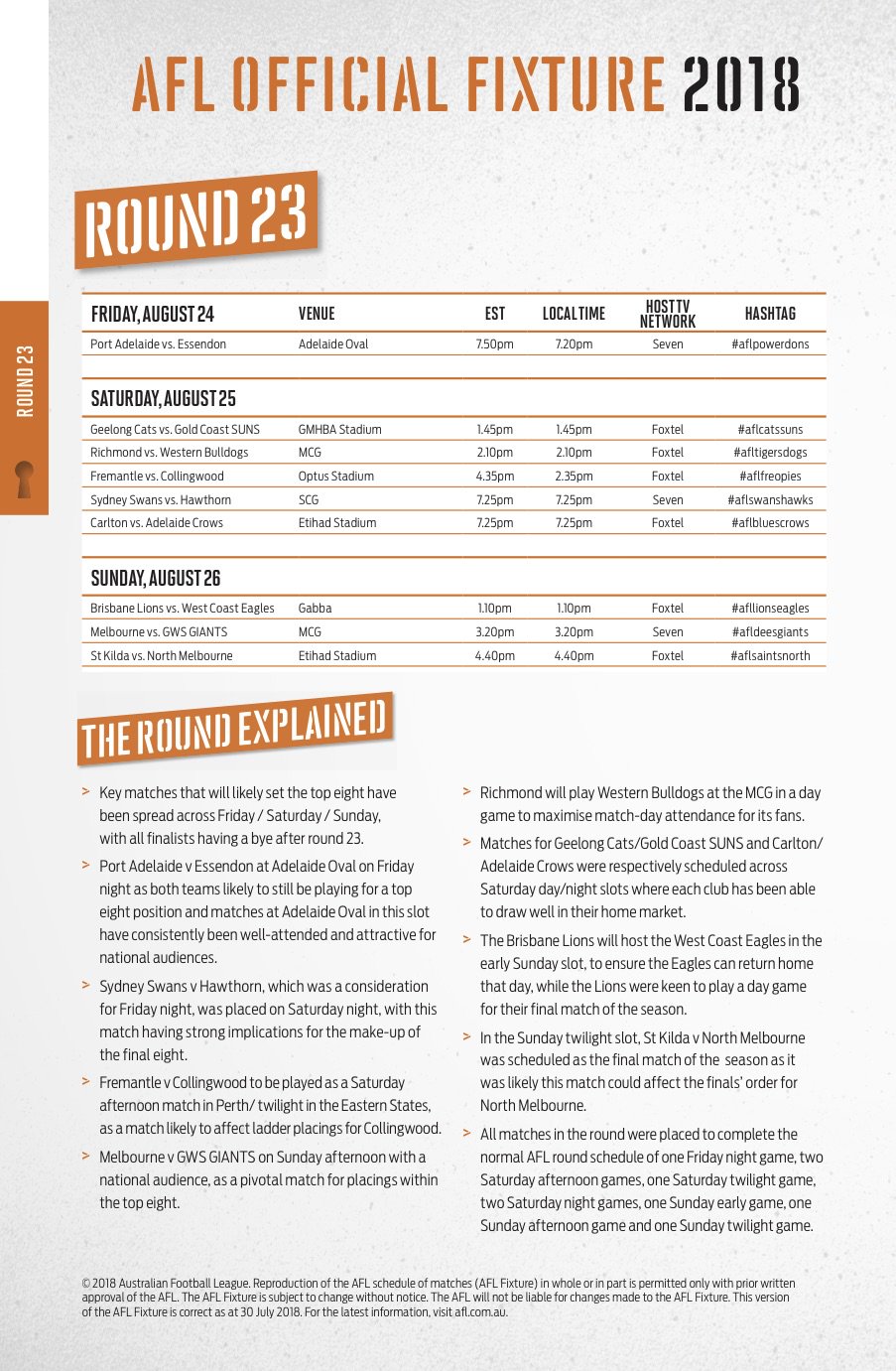