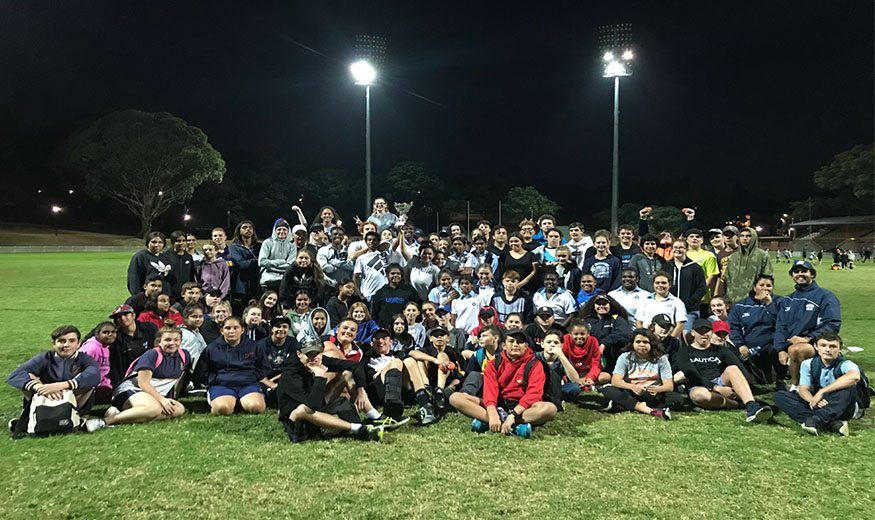 The inaugural AFL First Nations Cup was held today in Sydney ahead of the AFL’s Sir Doug Nicholls Round next week.

With the help of NASCA in coordination, and the Sydney Swans and GWS GIANTS in support, the overall aim of the AFL First Nations Cup was to bring the young Aboriginal and Torres Strait Islander communities together, while learning the origins of AFL.

AFL NSW/ACT Indigenous Programs Manager, Charlee-Sue Frail says she is thrilled by the success of the inaugural competition.

“We wanted to have a flagship gala day event in Sydney ahead of Sir Doug Nicholls Round, and we’re excited to see it succeed,” says Frail.

“We’re proud to partner with an Aboriginal organisation such as NASCA, who is doing great work within our communities and with the younger generations.

“It was so great to see young Aboriginal and Torres Strait Islander high school students meeting each other, having fun, and celebrating their cultural strengths.

“It was empowering to be a part of the day and to see the great work of NASCA, St Scholastica’s College, and our own Western Sydney Indigenous Academies in full flight.

“We thank the Sydney Swans and GWS GIANTS for their support on the day, and look forward to seeing everyone at Marn Grook at the SCG on Friday, June 1.”

If you would like to learn more information about AFL NSW/ACT’s Diversity Programs, please contact Charlee-Sue Frail on charleesue.frail@afl.com.au.