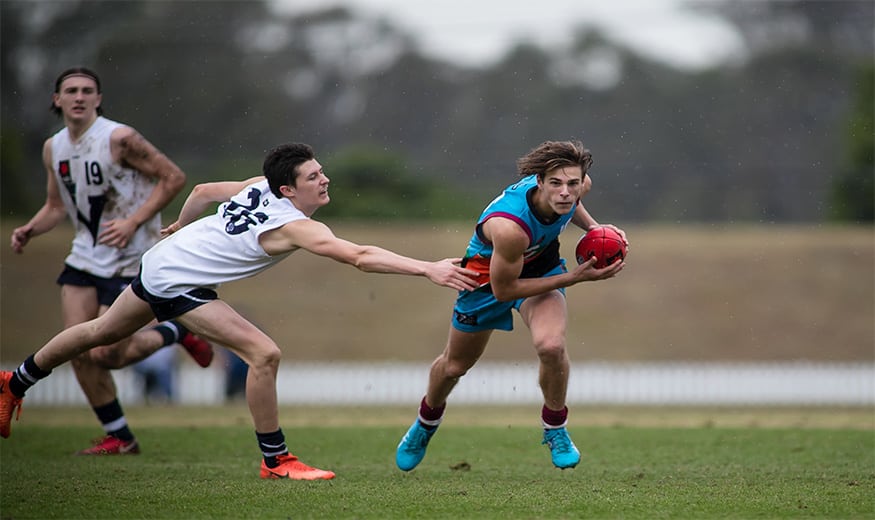 The Allies have won their opening round match of the 2018 NAB AFL Under-18s Championships against Vic Country.

Featuring four players from the AFL NSW/ACT region including Kieren Briggs (Pennant Hills), James Peatling (Pennant Hills), Jacob Koscitzke (Albury) and Tom Green (Canberra), the local talent starred for the Allies ensuring they would get across the line on their home turf.

The game remained tight throughout with Vic Country leading at every break, but it was not until the final term where local Sydney boy, Kieren Briggs would take charge of the match. Having spent much of the game in the ruck, Briggs was moved forward and quite simply dominated. Vic Country had no match for Briggs’ strength in the last quarter where he put three goals on the board.

Assistant Coach, Lloyd Perris said he was pleased with the performances of all four of the AFL NSW/ACT players on the day, noting Kieren Briggs as a top performer.

“Kieren Briggs was in the ruck and up forward, he was outstanding,” said Perris.

“He took multiple marks – big contested marks – and then he finished his work as well and kicked a couple of goals, so it was really pleasing for Kieren to start the campaign like that.”

Tom Green and James Peatling also worked well through the middle with the wet conditions playing into Green’s playing style as a big-bodied midfielder. Both hit the scoreboard once each, meaning half of the Allies’ goals were kicked by local players.

Koscitzke also played a key role in the Allies’ victory, swinging back into defense to quell the spirit of Vic Country forward, Hudson Garoni who would only kick one more goal for the rest of the game following Koscitzke’s move. Also assisting Briggs in the ruck, Koscitzke’s adaptability will bode well for him going into Round Two Allies selection.

Perris also said that all four boys would likely keep their spot on the team for Round Two with other players such as the injured Mathew Walker and Nick Blakey available for selection as well.