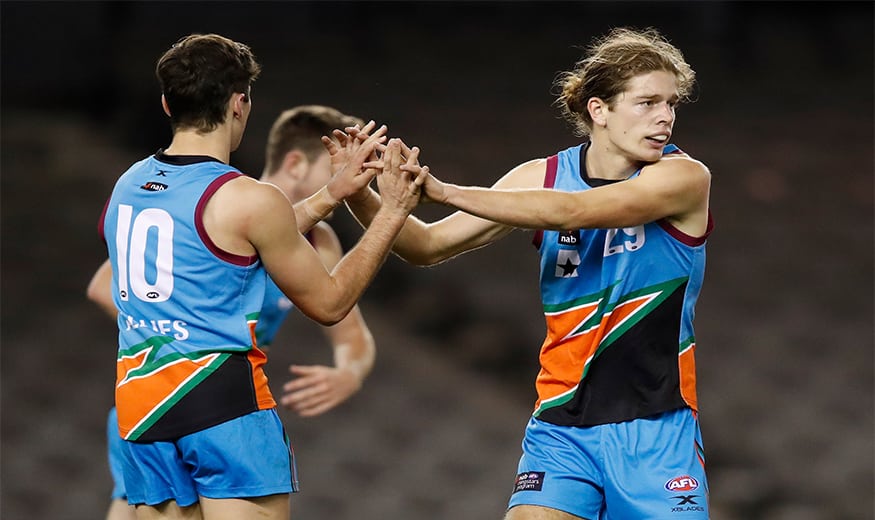 It was a tough start to Round 5 of the 2018 NAB AFL Under-18s Championships for the Allies, with Western Australia applying the pressure from the get-go.

Luckily for the Allies, it took seven inside-50s for Western Australia to convert as Kieren Briggs, Jacob Koschitzke, and even Nick Blakey played roles in the Allies defensive-50.

Blakey was right to be frustrated in the opening term with a couple of lead opportunities missed after some poor inside-50 deliveries seeing goal-chances going begging. He did eventually make his presence known on the scoreboard, soccering the Sherrin through from a contest in the goal square. From here, the Allies went into the first term with a 14-point deficit.

The second quarter didn’t begin all too pleasingly for the Allies either as Western Australia continued to bare down right across the field.

It was Sydney Swans Academy product, Joey Reinhard who would spark the Allies into action, opening their account for the second term. From here, the visitors were able to put some pressure on the Western Australians.

Queensland’s Connor McFayden got himself on the end of a Kieren Briggs long-bomb from 50-out to convert, while Jesse Quint, also from Queensland, kicked another. Despite hitting back, Western Australia was able to add another another five goals, taking a 27-point lead into half-time.

Western Australia stuck-in early as the third term got under way, but the Allies were able to fight back with the AFL NSW/ACT locals in the thick of the action.

GIANTS Academy member, Mathew Walker scored his first for the match after Blakey was moved into the midfield, showcasing his versatility across the ground.

Later, coming off the bench, Briggs was able to lay a tackle, gaining a free kick as he passed to Blakey, who lasered a kick into Walker again. Unfortunately Walker was off-target, but the up-and-about sentiment remained. By the siren, the Allies had shortened the margin to 17 points.

The Allies were quick out of the blocks as the final quarter got underway. There were two missed opportunities early, both involving Blakey – Blakey himself missing from a set shot.

With the match open for the taking, the Allies continued to miss. Increasingly, the Allies relied on Jacob Koschitzke who had played an incredible game down back.

Despite some stellar work in the middle from Briggs and Sydney Swans Academy’s Joshua Stern, the Allies missed three in a row. Unfortunately for the Allies, Western Australia would quell their run with an immediate goal response.

The final quarter would be one of the most even, with the two teams going goal for goal throughout. Again, the Allies didn’t take their chances in front of goal. The work was being done, but the proof was not on the scoreboard.

Overall, the Allies kicked six behinds in the last term, with their inaccuracy across the game ultimately costing them the game.

Western Australia would run out as eight-point winners in the final match of the 2018 NAB AFL Under-18s Championships at Etihad Stadium.

Pennant Hills’ Kieren Briggs was named the Allies MVP for the Championships after starring across the ground in all four of his matches.