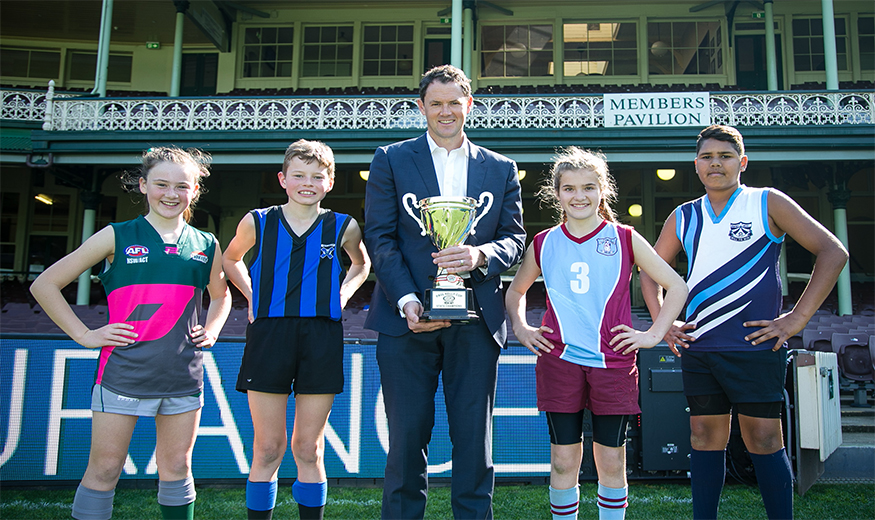 The winners of the 2017 Paul Kelly Cup  were crowned in Sydney today, with Knox Grammar School (Sydney) and Wallsend South Public School (Newcastle) taking the Boys and Girls titles respectively.

Following months of primary school competition held across New South Wales and ACT, 17 schools from all directions of the region descended upon the SCG to decide the 2017 Champions.

As the largest primary school AFL competition in New South Wales and the ACT, the cup is named after Sydney Swans legend, Paul Kelly. Kelly opened the morning with a message to players on the SCG big screen, while current Sydney Swan, Isaac Heeney also made an appearance.

After a morning full of round-robin competition, it all came down to two Grand Finals. The final of the Girls competition was played out by Holy Family Primary School Kelso who took on Wallsend South Public School. After a match full of intent by both sides, Wallsend South came out on top with a 25-point victory.

In the Boys competition, Knox Grammar School (Sydney) played Kempsey West (Northern New South Wales). Despite lot of passion felt between the two sides, there could only be one winner, with Knox able to edge out Kempsey West by 35 points.

AFL NSW/ACT Schools and University Programs Manager, Jonathan Bence said he was thrilled with the continued success of the competition.

“Today was a fantastic ending to a great year of primary school footy,” said Bence.

“With over 14,000 participants taking part across the year, the Paul Kelly Cup shows no sign of slowing down.

“Pleasingly, we have also seen enormous growth within the girls competition, with a number of new teams coming on board. It was also great to see a marked increase in the number of women umpiring and coaching as well.

“Today’s finals were played in incredible conditions at the SCG We greatly appreciate the support received by the teachers, parents, and students who all traveled the length and breadth of the state to play in Sydney. Congratulations to all involved.”