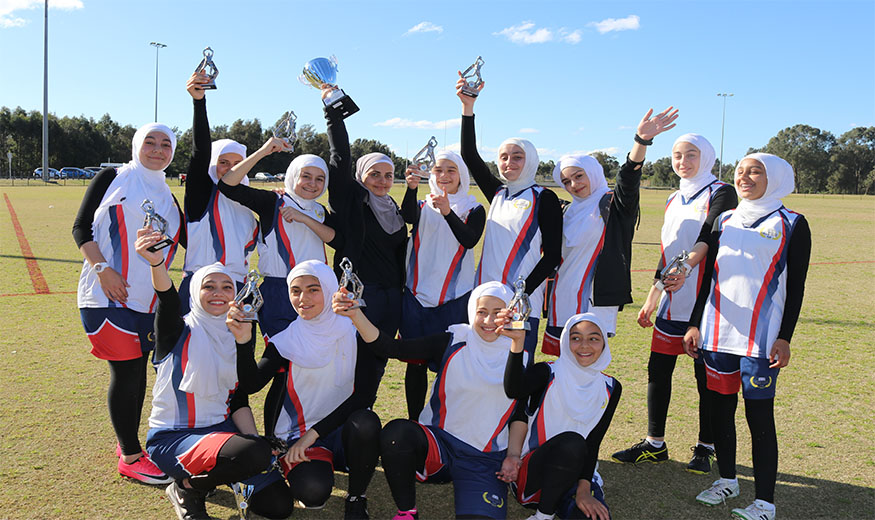 A round-robin tournament for high school students, the participants involved were all females from multicultural backgrounds, born in 2002 or 2003.

Ten teams played across the day with over 120 females involved, most of whom had never played Australian Football before.

AFL NSW/ACT Diversity Development Officer. Jessica Atoui said the day was a great way to engage more females from non-English speaking backgrounds, and to give talented athletes the opportunity to progress into the AFL’s Talent Pathway.

“This year, because of the upcoming National Female Diversity Championships, we wanted to create a talent pathway,” said Atoui.

“Today’s inaugural Female Diversity Cup is stage one, which means getting the girls from local high schools together to play. From there, we will select 15 players to progress to stage two, which is our talent testing day to be held next month.

Following stages one and two, a team will be selected for the National Female Diversity Championships, which will be held in Byron Bay in October.

Auburn Giants player and coach, Lael Kassem will be one of the coaches for the National Diversity Championships.

Kassem was on hand to assist in identifying talented players to try out for the team, and said she was impressed with the talent and effort on display.

“It has been fantastic. There’s a lot of talent out there. It’s amazing to see how many girls are participating and how far the game has come,” said Kassem.

“For the majority of the girls, this is their first time [playing]. They don’t play community footy, but competitions and days like these are only going to grow the game.

“It encourages the girls to get involved in community footy.”

The two teams had drawn when they met earlier in the day, however, the Grand Final produced a dominant display by Al Noori – winning convincingly by 22 points.

Al Noori student, Aquila Ali said that winning the Grand Final was her personal highlight from the day.

“We had played Kingsgrove earlier in the day and had a draw, so to come back and win was really exciting,” she said.

“The second time around, we knew they were a really good team and that we could lose, so the motivation was there. It was great to win with my team.”

“I like the people that you meet and I just like having a go out there by getting the ball and seeing what you can do with it,” Sarraf said.

Sibella has been playing Australian Football for the past six years. Until this year, she played with the boys, but now she plays for Western Suburbs in the Youth Girls competition.

As one of the only girls on her school team to have played before, Sibella said she hopes her school friends may now join her playing on the weekend.

A Sydney Swans supporter, going forward Sibella hopes to be a part of the Sydney Swans Youth Girls Academy before ‘hopefully bigger and better things’.