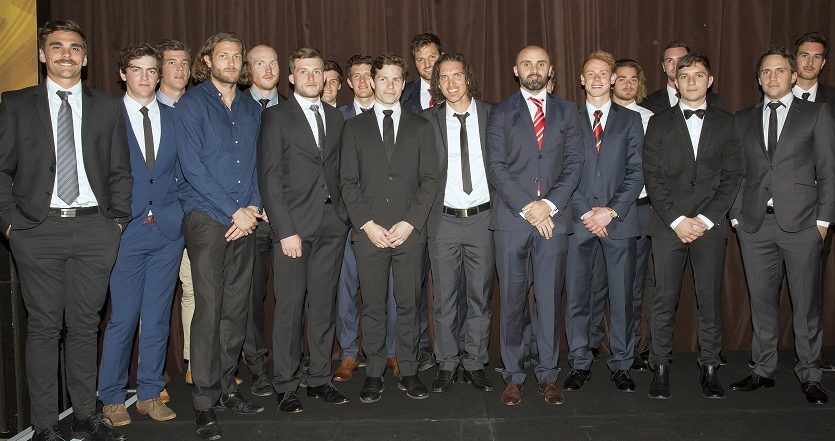 The 2016 NEAFL Team of the Year. Photo credit: Tarrant Yelds.

The NSW/ACT region is well represented in the 2016 NEAFL Team of the Year, which was announced in Sydney on Sunday night at the 2016 NEAFL MVP Awards.

Players from all four NSW/ACT based NEAFL teams – the Sydney Swans, GIANTS, Sydney University, and the Canberra Demons – were named right across the playing field, from backs to forwards, and through the midfield.

Harper went on to challenge eventual 2016 NEAFL MVP winner, Aspley’s Matthew Payne for the top accolade of the night, missing out on taking the honours by just one-vote.

Young was also in the running up until the final rounds, finishing in fourth position by the end of the count.

Sydney University’s William Sierakowski and the GIANTS’ Harrison Himmelberg were placed across the backline for Team of the Year, while the Sydney Swans’ pairing of Brandon Jack and Jordan Foote were named on the wing.

NEAFL Operations Manager, Patrick Carter said the inclusion of six NSW/ACT players in the Team of the Year was a fantastic result for the region.

“All of these players came through the NSW/ACT talent pathway and it’s great to see them succeed in a state league competition,” said Carter.

“Jordan Harper especially had a fantastic year, which has led to an invitation to the State Draft Combine later in the year, and we wish him the very best in hopefully fulfilling his AFL dream.”

Premiership winning Sydney Swan and first-year NEAFL coach for the Swans Reserves, Rhys Shaw was awarded Coach of the Year and NT Thunder’s, Cameron Ilett was named NEAFL Team of the Year Captain for a history making third year in a row.