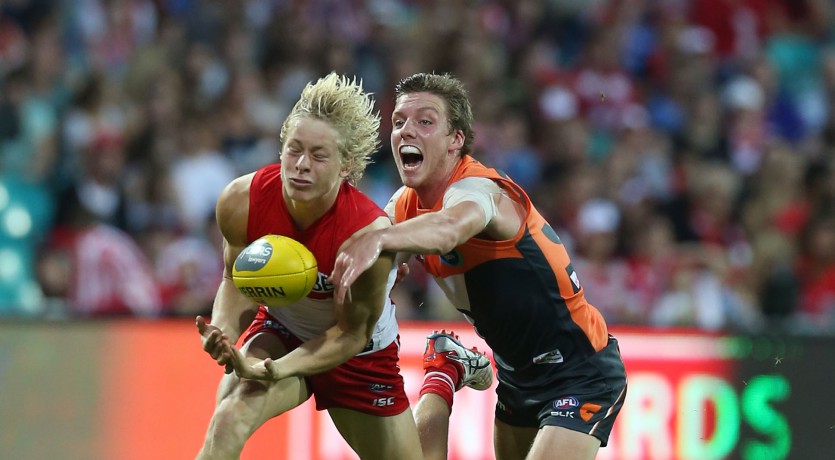 1. Swans fly out of the blocks

Sydney have won all seven first quarters in their games against the GIANTS, averaging a 17 point lead at the first break.

2. …But the GIANTS finish fast

The GIANTS have won five of the seven last quarters in the Sydney derby, including the last three. If the scores are close at three-quarter-time look for the GIANTS to charge home.

If the Swans weren’t already sweating on the fitness of spearhead Lance Franklin the fact that he has booted five goals in each of his last two outings against the GIANTS will have them praying the superstar passes a fitness test.

Last time these two teams locked horns at Spotless Stadium the match had to be temporarily delayed due to a quarter-time lightning storm. There was a 25 minute break for the weather to clear after lightning struck the ground late in the first term.

5. GIANTS get their first

That round 1, 2014 match would prove memorable not only for the weather but for the fact the young GIANTS recorded their first win over their neighbours. A six goal to nothing final term helped the GIANTS overturn a seven point deficit midway through the last, eventually running out 32 point winners.

Spotless Stadium is fast becoming a stronghold for the GIANTS. A 5-1 record at the ground in 2015 and the site of the GIANTS’ only triumph against the Swans will give them a great deal of confidence ahead of this week’s match.

GIANTS midfielder Adam Treloar averages a massive 28.2 disposals against his crosstown rivals, although a groin injury could prevent the youngster from playing this week.

Sydney Swans co-captain Jarrad McVeigh was a junior at Pennant Hills AFC and seems to relish the occasion of the derby. In previous matches McVeigh has racked up figures of 28, 35 and a huge 37 in the round 14, 2012 clash.

The last time these sides met Isaac Heeney announced himself to the footballing world. His four goal performance earned him a NAB AFL Rising Star nomination. Above: Isaac Heeney in action during the Round 3 clash with the GIANTS.

GIANTS co-captain Callan Ward currently holds the club’s game record having played 80 out of 85 games. While his first game may have ended in defeat to Sydney, midway through the first quarter Ward sealed his place in history as the club’s first ever goal-kicker in the AFL.

Swans contested footy machine Josh Kennedy has managed to secure the three Brownlow votes a whopping three times out of his seven encounters with the GIANTS. Kennedy will once again take some stopping on Saturday.

Two players coming into this match high on confidence will be Rhys Palmer and Tom Mitchell. On the back of 41 touches and five goals respectively in last weekend’s fixtures both players will be hoping for similar performances this Saturday.

Swan Daniel Hannebery has been in scintillating form, averaging nearly 29 disposals this season. In the Swans’ last two victories against the GIANTS the midfielder has amassed 34 and 35 touches respectively. Expect more of the same this weekend.

Lachie Whitfield would have been disappointed with his 12 disposals last week. Look for the GIANTS former number 1 draft pick to bounce back, especially given his career-high 37 possession game in the derby earlier this season.

GIANTS spearhead Jeremy Cameron averages 2.7 goals per game against the Swans. Sydney’s defence can again expect to have their hands full dealing with the left-footer, who currently sits second in the race for the Coleman Medal, ahead of the likes of Lance Franklin and Kurt Tippett.